Keeping Raven Yacht Owners in touch with each other 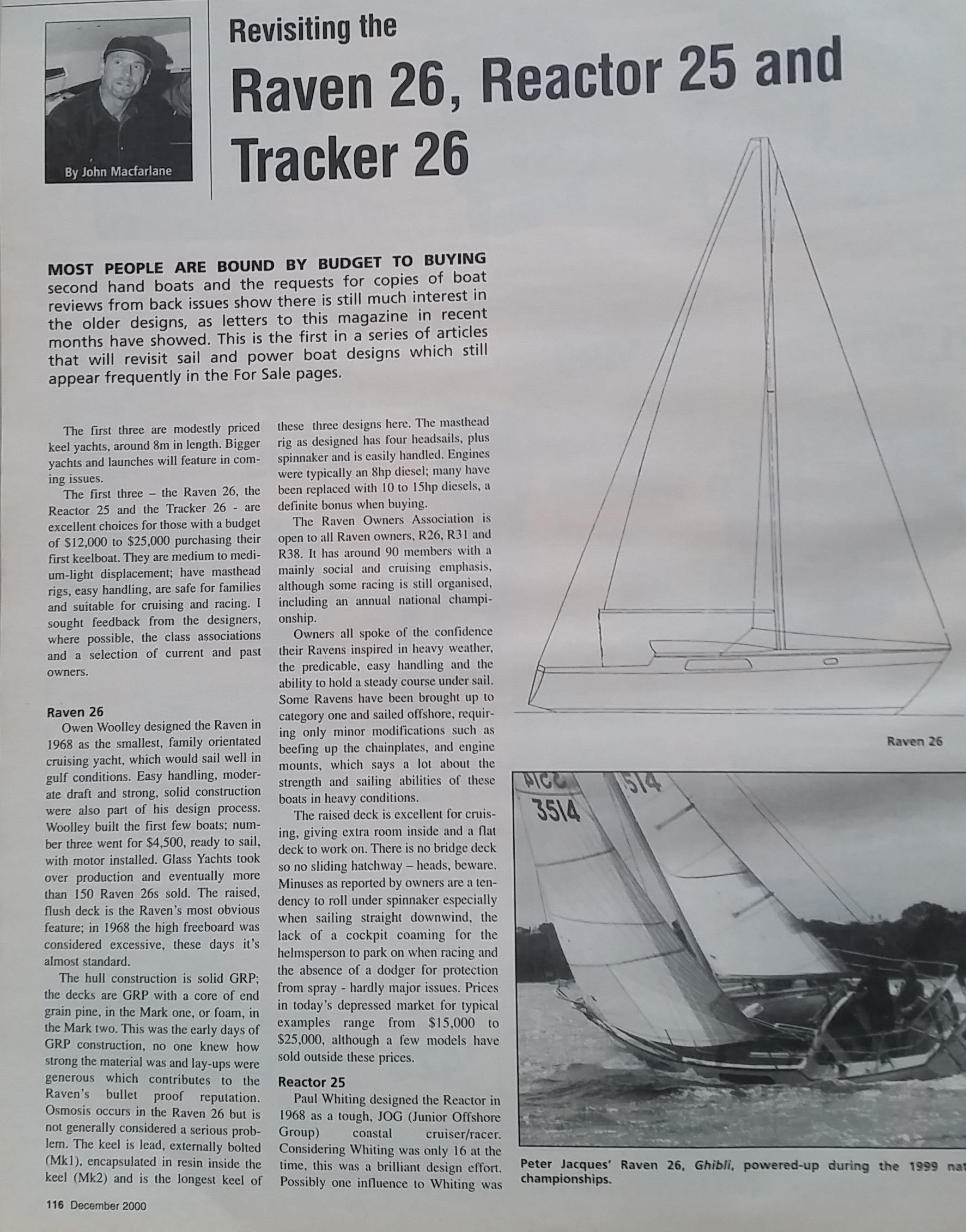 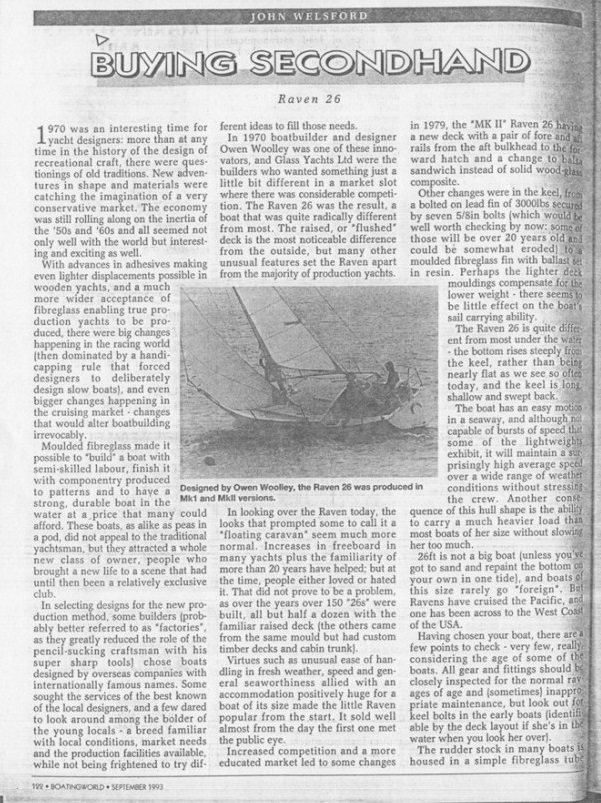 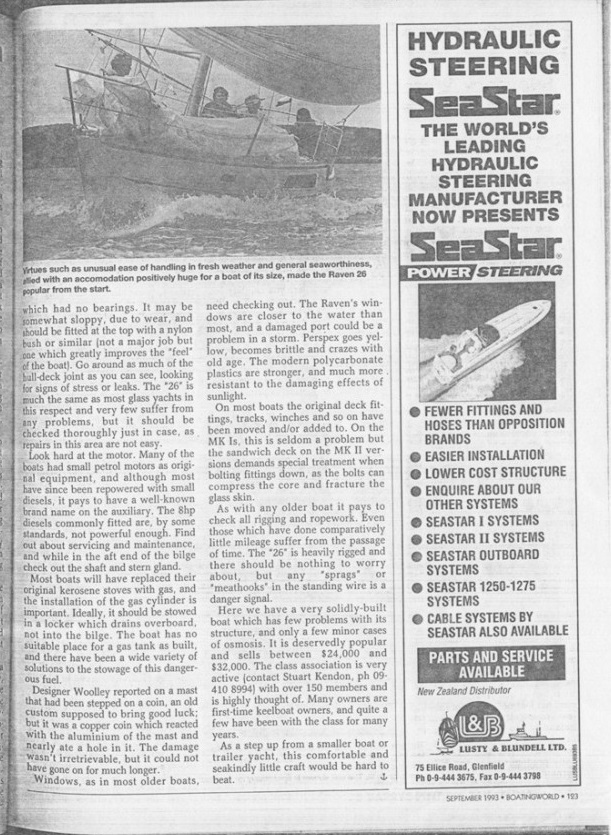 To meet the growing need for a safe, well performing cruiser/ racer Owen Wooley decided to design and build a timber production yacht suitable for families. This yacht had to be big enough to take the family sailing and its design was inspired by flush decked mullet boats which, with their raised decks maximised interior room. This yacht was to become the Raven 26.

The initial boats were built in glued double skin timber sheathed both sides with glass and epoxy however after building “Raven” he decided the method was too time consuming.

He exhibited “Raven” at the Auckland boat show in 1969 and gained an order for another timber boat from which a GRP mould was taken (Raven 2). The mould is believed to have been put aside for some months while Owen focussed on building several commisioned launches.

Don Moseley and Mick Elmes, owners of Ideal garages, asked to use the mould for production. This was agreed to and the company “Glass Yachts” was formed for the purpose of building the Raven 26's. Te Tahi was the first glass Raven 26.

In around 1982 Colin Gestro and Theo Perry bought the moulds and a few more boats were built but at that time there was litle demand and customers were looking for something larger. As a result production of the Raven 26 ended and the Raven 31 was then designed and built.

The original 2 boats (Raven and Raven 2) were of timber hull/deck construction and a mould was taken from the second, as stated above to build the hulls in GRP.

The Mk 1's were manufactured between 1970 and 1979 by Glass yachts. The timber deck had a unique feature as the interior was moulded and then the end grain pine blocks laid which resulted in a pleasing decorative interior finish. The deck and cockpit was sheathed in glass and cork granules used to provide a non slip surface on the deck sections. Later Mk 1 models had a ply deck and composite cockpit instead of the glassed ply.

The earliest boats can be readily identified as they had no forward anchor well provided.(Blue Raven #5 has no anchor well but Te Tahi has one ??)

The deck on the Mk 2 (1979 on) was made from balsa sandwich composite and incorporate 2 rails from the aft bulkhead to the forward hatch, a fairing was also provided.

Differences in the keel design were also introduced from 1979. The Mk1 had a bolted on keel attached with seven 5/16” bolts. In the Mk 2 the keel was manufactured with ballast set in resin inside a moulded keel.

About half a dozen boats were built with the “conventional” cabin trunk and timber deck configuration but the hulls were from the same mould and simply cut down in freeboard height.

Interior configurations vary as many boats were fitted out by the owners.

Some have a saloon type seating arrangement (Pt or Stbd sides have been observed) but the most common configuration consists of galley and storage to Pt with seating on Stbd side, almost all have quarter berths and the forward arrangements typically consist of toilet to Pt with V berth and storage under.

Although susceptible to water ingress the Mk 1's have good cockpit storage in side and aft lockers, in the Mk 2 this is generally “unused” space above the quarter berths but access for an aft locker is provided

The design worked well with Owens stated goals of designing a safe, well performing cruiser/racer and he opted against the trend at the times for light displacement. With medium displacement and relatively slack bilges his design made for comfortable passage in a seaway and good balance.

It is clear that the design provided good balance and sailing with any combinatioin of sails will result in little helm weight. In fact even sailing under main or genoa / job alone a good degree of balance with no significant helm weight is felt while still being able to make reasonable passage to windward.

The large 150% overlap No 1 genoa is probably the most commonly seen headsail and with 260 Sq ft of sail up front care must be taken to prevent oversheeting and closure of the “slot” with consequential mainsail backing which impacts performance. This can also be corrected, to a degree, by running the genoa cars aft and opening up the upper section of the sail which improves drive but reduces pointing ability. This “slot closure” is more common with older sails which have stretched to varying degrees.

The No 2 or No 3, the latter generally recognised by the strop above the head, both set well in suitable conditions. The Raven 26 can comfortably carry full sail up to 20 Kn and above that options for reducing sail are varied but progressive main and headsail reduction is preferred.

Setting a No 3 when wind conditions increase and managing balance and heel angle via mainsail reefing or traveller adjustments works well for most owners.

Mainsails can be found fully battened or with conventional battens in a variety of cloth weights and normally have provision for two reef points. A third reef is almost certainly not required and if the wind is greater that 35-40 Kn the boat is better handled on #3 headsail alone.

With masthead spinnaker set the boat can get good downwind speed in the right wind and sea conditions. Reaching with spinnaker up can be exciting at times and care needs to be taken if any significant heel is encountered as, in these conditions, the rudder can “let go” resulting in a round up or broach. This is not uncommon to many yachts and only occurs in race situations when hard pressed.

Rigging some barber haulers for the spinnaker sheet and brace is a good idea to increase control over the spinnaker. I have some that are simply attached to eyebolts installed into stanchion bolt locations with quick disconnect clips, ie: no blocks or pulleys, keep it simple!, is always a good idea.

With headsail “gull winged” the boat can develop a degree of rythmic rolling if the upper sections of the sails are not kept under control, while this can be disconcerting it has never lead to a broach type situation.

Seas that would stall smaller / lighter boats do not appear to worry the Ravens when hard pressed although the leeward bow can pound quite hard in short / choppy seas when going to windward.

Most boats now have the mainsheet traveller mounted on the deck and attached mid boom but some owners initially opted for sheeting from the aft end of the boom to the cockpit floor with no traveller arrangement.

Many published statements have been made about the Raven 26's handling and sea-keeping abilities, some of these are copied below:

Maintenance / possible things to watch out for:

With any boat approaching, or over, 40 years old maintenance and repair becomes a fact of life and my experience has been that there is not much that cannot be corrected with some pre planning, good tools and trade practices. Some potential problems are also pretty easy to prevent.

To simplify the listing I have broken the types of things I have found or are aware of into groups, hull/rudder, deck, rig.

Interior inspection of furniture, wiring, plumbing and engine installation is thought to be relatively straightforward and poor quality installations or defects should be self evident.

If in doubt get it inspected by a pro and a pre purchase inspection by a qualified boatbuilders is always a good idea and generally worth the money spent when bargaining a final price.

I can only talk about the Mk 1 from experience:

Re Mk 2 its pretty obvious that deck hardware bedding into a composite/ balsa core needs to be in good condition and stress cracking is indicative of core crushing or other damage.

The rig is a pretty simple design and strongly specified. Defects to standing rigging may not always be obvious to the inexperienced and many may be quite old by now. Check it thoroughly and if you cant maintain decent tension in the rig look for compression of the mast step, deck area or post base area itself.

Some things I have found that needed to be corrected are:

The Raven 26 is a pretty well proven boat and the hull is strongly built.

Many have travelled offshore, some to Australia, one to the west coast of the USA and many up to the Pacific islands.

Raven 2 (sail # 975), the second timber Raven 26 from which the mould was taken for all glass boats, successfully competed in the Round North Island 2 handed race in Feb / Mar 1977 crewed by Kevin Kelly and Laurie Needham from Panmure. They came 3rd on handicap and 14th overall in the fleet of 38 that started.

compression post
by Alex and Paul Richardson over a year ago